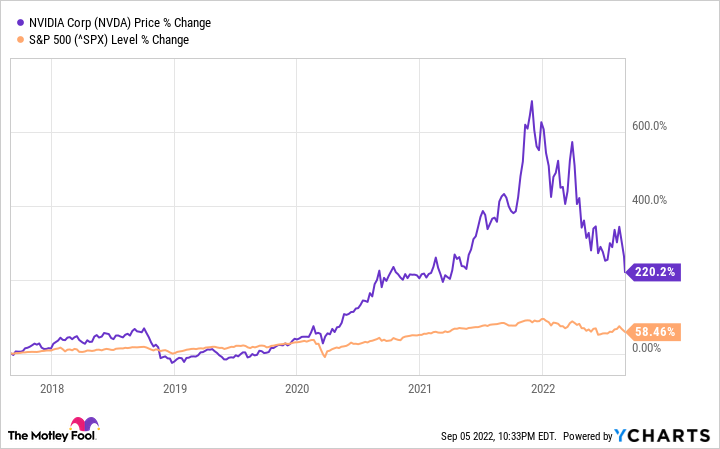 NVDA data by YCharts
That’s why it may be a good idea for savvy investors to look into the future and see where Nvidia may be after five years, as this could help them decide whether to buy this tech stock while it is beaten down.
The gaming and the data center businesses will continue to be the pillars of Nvidia’s growth over the next five years. However, the company is exploring new areas within these niches that could supercharge its growth.
Nvidia is known for its data center graphics cards but is now making progress in data processing units (DPUs) and central processing units (CPUs) as well — two areas that could unlock a massive growth opportunity for the company.
Nvidia is expected to start sampling its third generation of DPUs, the BlueField-3, this year to tackle artificial intelligence and analytics workloads. These are programmable networking devices that offer a mix of general-purpose computing along with accelerators to speed up tasks. The DPUs also reduce the load of a server CPU by taking on networking and storage functions, thereby improving the efficiency of server processors.
What’s more, Nvidia is already working on its fourth generation of data center DPUs that are expected to be released next year.
It is not surprising to see why Nvidia is looking to establish its dominance in the DPU market. CEO Jensen Huang believes that DPUs are likely to be deployed within every data center in the world by 2026 to accelerate workloads.
Meanwhile, Nvidia is preparing to take a chunk out of the lucrative server processor market as well. The first servers powered by Nvidia’s Grace data center CPUs are set to hit the market in the first half of 2023. Nvidia hasn’t tapped the server processor market so far, a space that’s dominated by the likes of AMD and Intel. That’s why the company’s move into this market could be a big deal, especially considering that the server processor market is expected to generate $42 billion in revenue in the long run.
The overall data center accelerator market is expected to clock annual growth of nearly 39% through 2027, hitting nearly $70 billion in revenue at the end of the forecast period. So Nvidia could see itself in a stronger position to tap into this huge opportunity over the next five years with a broader product portfolio.
Nvidia’s gaming business is in a tight spot right now thanks to an oversupply of graphics cards. However, the company is taking steps to reduce its dependence on gaming-related hardware with the help of cloud gaming.
The cloud gaming business is expected to generate $22 billion in revenue by 2030, growing at an annual rate of 57% through 2030. The market’s impressive growth will be driven by fast internet speeds and lower costs as compared to purchasing gaming titles and hardware, as well as a growing selection of titles that gamers could stream to their devices. Nvidia is already in a terrific position to take advantage of cloud gaming, as it has built a solid user base with its GeForce Now service.
The chipmaker had generated $12.5 billion in revenue from the video gaming business in fiscal 2022. This means the potential size of the cloud gaming business in the long run and Nvidia’s estimated revenue share of 60% in this market suggest that this emerging segment could move the needle in a bigger way for the company in five years.
All this indicates that investors may want to keep a close eye on Nvidia and consider going long if the short-term weakness sends the stock price lower, especially considering that analysts are still upbeat about its long-term prospects and expect 22% annual earnings growth for the next five years.

Harsh Chauhan has no position in any of the stocks mentioned. The Motley Fool has positions in and recommends Advanced Micro Devices, Intel, and Nvidia. The Motley Fool recommends the following options: long January 2023 $57.50 calls on Intel and short January 2023 $57.50 puts on Intel. The Motley Fool has a disclosure policy.
*Average returns of all recommendations since inception. Cost basis and return based on previous market day close.
Market-beating stocks from our award-winning analyst team.
Calculated by average return of all stock recommendations since inception of the Stock Advisor service in February of 2002. Returns as of 10/09/2022.
Discounted offers are only available to new members. Stock Advisor list price is $199 per year.
Calculated by Time-Weighted Return since 2002. Volatility profiles based on trailing-three-year calculations of the standard deviation of service investment returns.
Invest better with The Motley Fool. Get stock recommendations, portfolio guidance, and more from The Motley Fool’s premium services.
Making the world smarter, happier, and richer.