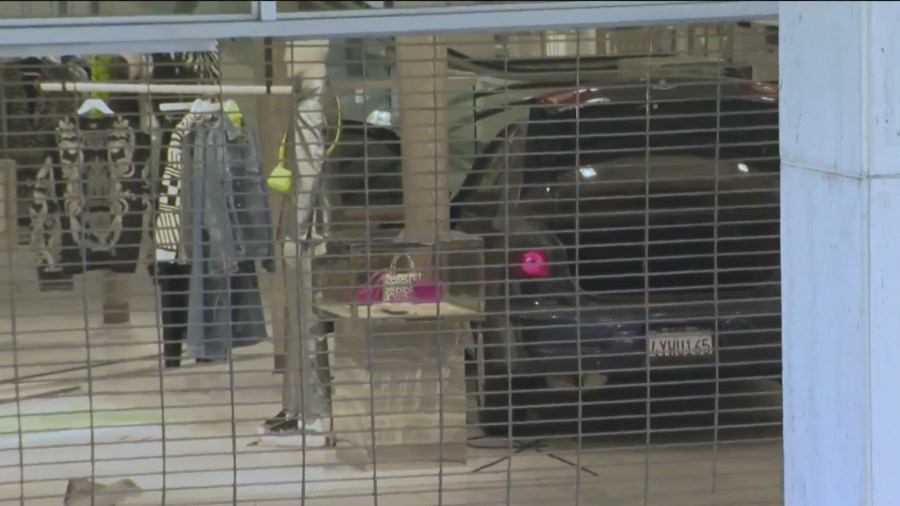 A group of thieves rammed a car into a high-end department store in Beverly Hills on Saturday morning and managed to escape with an undisclosed amount of merchandise.

It happened around 4:45 a.m. at Neiman Marcus, near the intersection of Wilshire Boulevard and Roxbury Drive.

Officers from the Beverly Hills Police Department responded to the store for calls regarding alarm activation.

When they arrived at the scene, they found that the dark colored Chevrolet sedan had crashed through the metal gate and window of the shop.

By the time the police reached the spot, the accused had fled with a huge quantity of goods and goods.

Smash-and-grab burglaries and violent robbery have been a recurring issue in high-end neighborhoods across Southland, with authorities warning of armed gangs targeting residents and businesses.

Howard Sunkin, who lives in Beverly Hills, said his family has changed the way he dresses and acts in public for fear of falling victim to one of these violent crimes.

“We don’t walk at night, we’re careful what jewelry we wear and we’re more conscientious when we pull up at night,” Sunkin said. “We look around before we get out of the car, things we’ve never had to do before.”

Residents who spoke to KTLA say they are tired of rising crime and living in fear.

“I’ve been in Beverly Hills for 16 years,” said a man named Michael, who was in the area for his morning run. “It’s just another, you know, shameless robbery in our neighborhood.”

Investigators are reviewing security footage from inside and the vehicle used to break into the shop was moved away from the scene. The vehicle is registered with Inglewood, but it is not clear at this time whether the vehicle was stolen.

Anyone with information about the theft is urged to contact the Beverly Hills Police Department at 310-550-4951. you can also Submit an anonymous tip online,