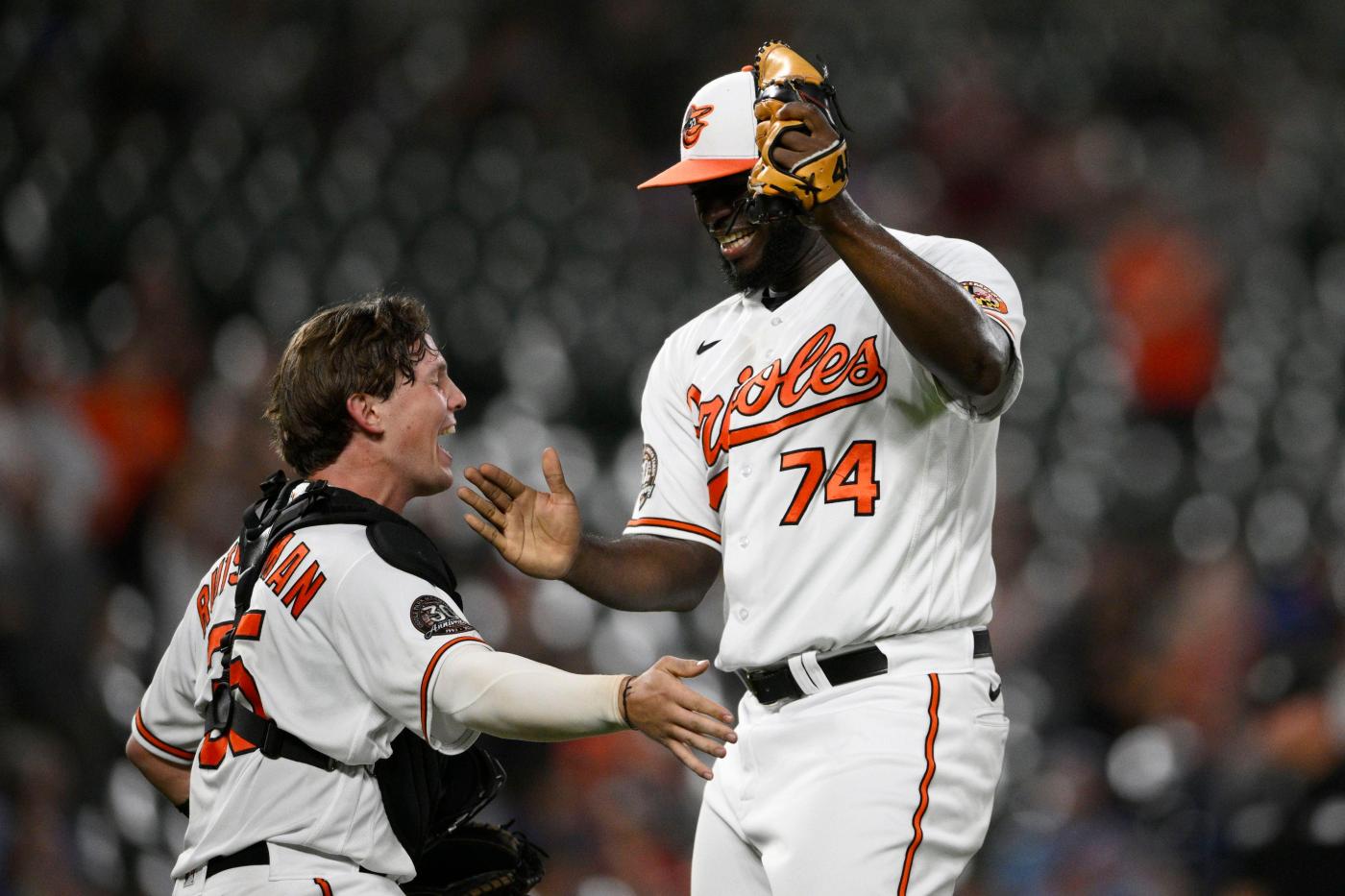 If there was a time for Orioles first baseman Ryan Mountcastle to get out of the slump that stretched from early July to August, it was Monday versus the Toronto Blue Jays.

Mountcastle hasn’t got any other team this season or during his career. And despite a .170 batting average and .435 OPS in his last 26 matches entering Monday – a period that did not include home runs – Mountcastle’s bat blast in the third innings seemed almost an inevitability. The ball flew over the new left-hand wall in just five games for his fourth homer against Toronto this season.

When he returned to the dugout, with a home run chain tied around his neck, he picked up the big orange ‘O’ on the end of the gold chain and examined it. He had not worn it for some time.

Mountcastle’s homer was part of a revived offensive for several Orioles in a 7-4 win at Camden Yards in the first game in what could be a crucial series against a fellow wild-card contender from the American League East.

“Mountcastle, he’s been grinding lately, and it’s been a tough couple of weeks,” said manager Brandon Hyde. “Seeing him get on one and hit him the same way he did and then hit the big take-on base there, that’s definitely a positive for us, Mountie has to go.”

The Orioles (57-52) play the Blue Jays (60-49), who have topped three wild-card spots just four times, entering Monday. They will face Toronto – a team they trail by three games – 14 times this season.

Before the Seattle Mariners faced the New York Yankees on Monday night, the Orioles were 1 1/2 games back for the wild-card spot. Including Monday’s win, the Orioles have a .500 or better record against every AL East team other than the Yankees.

“It’s felt like the last few months, when we realized we had our first winning month and then we did it again the following month,” said outfielder Austin Hays. “We can see where this team was, and we’re going to go out and hope to win every game. I think we’ve been in this mindset for the past few months, and we’re still going to continue to play good baseball.” are.”

Mountcastle, running late with a single in the eighth inning, provided some breathing space for right-hander Felix Bautista, who completed a four-out save after dismissing Dylan Tate and Joey Krehbiel, who had a shaky eighth inning. Allowed two runs in. This gave the Orioles the lead 6-4.

Bautista allowed the first two Blue Jays to reach in the ninth – although one was through error – before he dismissed Teoscar Hernandez and fielded Bo Bichet in a game-ending double play to save his fifth .

“Bautista steadied the ship with the big eighth, which he’s been doing all year,” Hyde said. “And in the ninth there came a little dicey but we made a great double game.”

Right-hander Jordan Lyles dropped two homers – doubling the number of long balls he allowed at Camden Yards this season – but the first and singles homers from Anthony Santander, Hayes and Mountcastle had three runs off Ramon Ureas. Homer was enough to inspire. Baltimore registered their sixth win in their last seven games.

“We try to work hard every night, no matter what team is playing,” said shortstop Jorge Matteo. “I know we are behind Toronto right now, but we come to the field every day to fight, every day to play, no matter who is on the field. We compete every day and try to be like a family It’s something we’re building around.”

Before Hayes returned to the lineup on Monday, the Orioles’ outfielder had to test whether normal throwing and swinging would add to the oblique tightness that forced him to miss the last four games.

“We were able to test it over the last few days,” Hayes said. “It gave a good response.”

An oblique tightness ruled Hayes out of five of the last six games, but he wanted to avoid a trip to the 10-day injured list – as he wanted to get back on the field as soon as he fully recovered.

Hayes’ return was remarkable, as was his swing in the bottom of the sixth. He connected a four-seam fastball to right-hander Trent Thornton and launched it into left field an estimated 426 feet deep.

Entering the game, Hayes held .542 Ops from early July, during which he suffered serious injuries. Like Mountcastle, Hayes’ return to form was welcome.

“I think the biggest thing for us today is to bring Austin back,” said Lyles. “Bringing him back into the lineup is one of our key components. But yeah, love Santander, he’s doing his job. Ryan is coming off the offensive with a really good, great game. And then Ramon puts another one on the seats. We can do a lot of different things from one to nine.”

>> Infielder Jonathan Araz said he expected to be out for another two weeks after fracturing his finger on July 25, and thought he would return to Triple-A Norfolk for a few games on rehab. Araaz fractured his right middle finger on a slide at second base in a rare start last month and has been on a 10-day injured list since then. “I hope I can swing this week, a couple throws,” he said, adding that he didn’t need surgery on the finger.

>> Right-hander Louis Head was recalled from Triple-A Norfolk on Monday to give Baltimore a fresh hand from the bullpen. Right-hander Beau Sulsar was picked after throwing 2 1/3 innings on Sunday.

>> Rylan Bannon was claimed a one-time waiver by the Los Angeles Dodgers, who traded the infielder to Baltimore in 2018 as part of a trade for third baseman Manny Machado. Without Bannon, the Orioles have an opening on their 40-man roster. ,

>> For the first time in the last two seasons, outfielder Cedric Mullins started without batting in the leadoff spot. With left-hander UC Kikuchi on the mound, manager Brandon Hyde replaced outfielder Ryan McKenna for the fifth time early in his career, hoping to pile up right-handed hitters. Mullins batted in eighth position and went 0-for-3 with a strikeout.