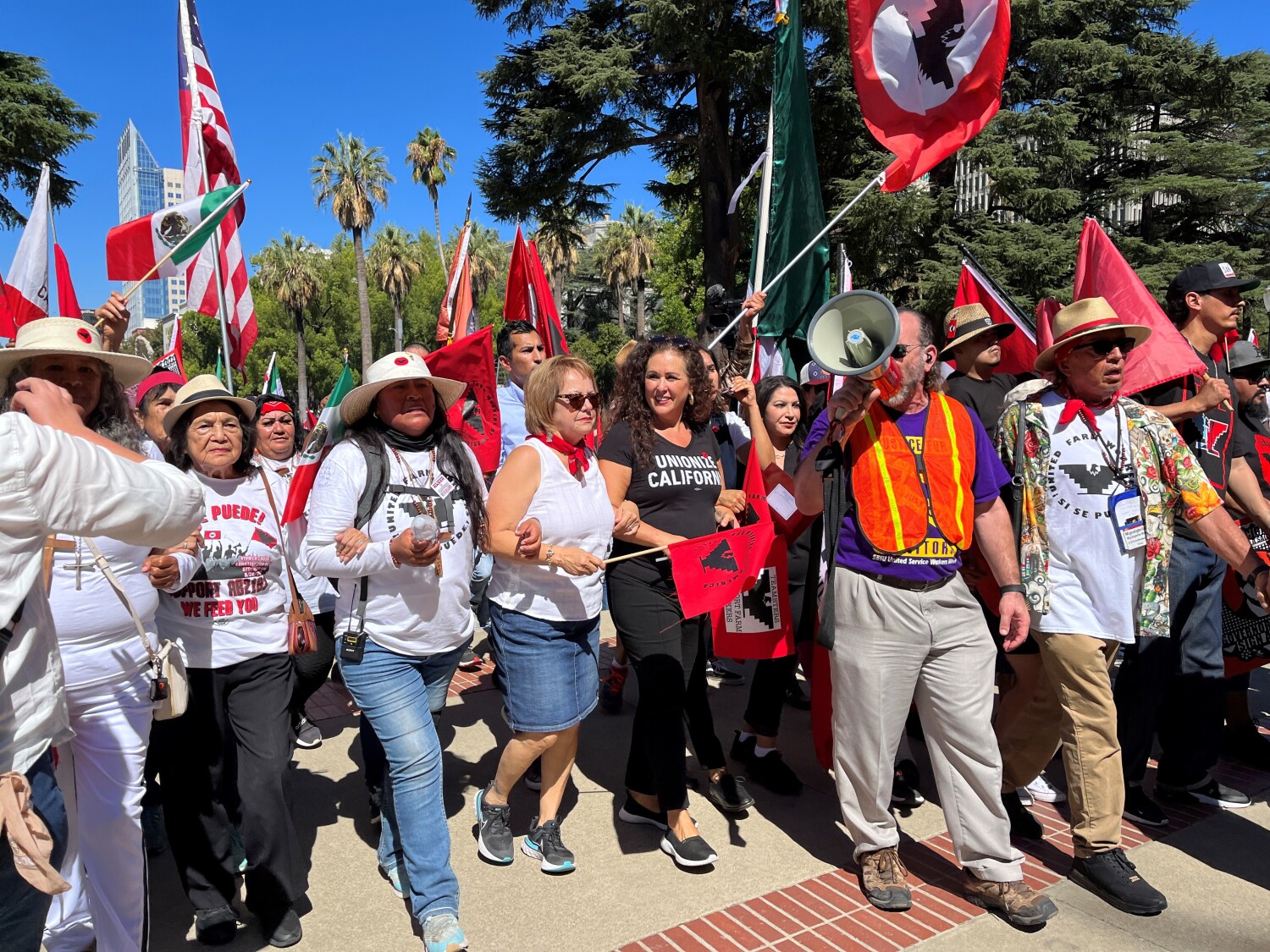 It was California Farm Worker Appreciation Day, and farm workers and their supporters arriving at the state capitol were disappointed but not defeated—a brief recap of 60 years of history for the struggling union that represents them.

But they also knew on Friday that they were unlikely to win what they wanted – the governor’s signature on a controversial bill.

“This march is not in vain,” Huerta, now 92, told the crowd as she tried to keep the energy positive. But it looks like it might be.

The gathering on the Capitol Steps was the end of the Central Valley’s 335-mile march through the August heat in support of a measure that would change the rules for how their union elections are held — Assembly Bill 2183 — but which Gov. Gavin Newsom indicated. That he will veto, although insiders have indicated that there is still room for a last-minute miracle.

The fate of that law aside, it was hard to live in that rush without realizing history—the same has changed for vulnerable workers in areas of California.

When Huerta began this journey in her 20s, farm workers had no voice, and certainly no power. They felt invisible, she said, and they were in the rooms where decisions are made.

Many workers themselves are still in that position today. We still shamefully exploit them – during the pandemic, in a summer scorched by the smoke of wildfires, I spent some time in Stockton with farmworkers who were being evicted despite the rules that mandated them every day. Should have continued to show up for work. Polluted air, condensate with pollution and COVID-19.

Even when we promise to do better, we don’t.

But their children are living separate lives, and the legacy of the first generation UFW members, and all those who worked in our fields at that time, is now the present tense of the second and third generations, which their parents dreamed of. Saw it and fought for it. ,

Take state Sen. Maria Elena Durazo, who hails from Los Angeles and is the daughter of a farm worker. Or California Federation of Labor leader Lorena Gonzalez, whose father picked strawberries.

Or everyday people like Rachel Ricketts, who pushed her 7-month-old daughter in a stroller while her 8-year-old son Joaquin held up a poster urging Newsom to sign. Ricketts’ grandfather was a farmworker. She runs a vintage boutique.

“I wasn’t going to stay at home for this,” she said. And neither did he have children. They will grow up as the third generation who know their roots.

That is power that you cannot undo, and cannot ignore.

About 40% of Californians are Hispanic or Latino, although they make up only 20% of the electorate. They are the majority in 11 counties, mostly in the Central Valley, and are becoming more politically relevant every day.

As political adviser Mike Madrid puts it, “This is an important constituency for Democrats, given that we are young, working class and headed in the right direction.”

But on Thursday evening, as the marchers made the final leg of their pilgrimage, Newsom made it clear that he was not ready to put his signature on it, in the resounding “signing the bill” sounding Friday afternoon. Despite the mantras.

my colleagues Jessica Garrison And Fidel Martinez The two wrote about the grueling journey that led to Chávez’s re-creation of a famous one in 1966, and the law—and the rounds of backroom negotiations that may or may not be going on, depending on who you ask. Huh.

The point of contention between the union and the governor is whether it should be decided when the workplace is hostile enough to change how potential union members register their support for joining the union—government or union— And how to handle chain of custody for ballots. Newsom argues that the Agricultural Labor Relations Board should have authority, but the union does not believe it is with producers.

As UFW President Teresa Romero has argued for months, it is about protecting workers who may be undocumented or intimidated by “intimidation and deportation”.

Newsom’s team is concerned that, as written, the ballots will not be secret and want the ALRB to remain in control of the process.

Newsom’s communications director Erin Mellon said in a statement that the governor “looks forward to signing legislation that expands the opportunity for agricultural workers to come together and be represented, and that she supports changes to state law.” to make it easier to organize these workers.”

Mellon continued, “We cannot support an untested mail-in election process, which lacks important provisions to protect election integrity, and is based on the assumption that the government can effectively enforce laws.” cannot apply.”

So for now no agreement and no signing, blistered feet or not.

Where does that leave the farmers?

Possibly pushed to another legislative session but still working on it. Disappointed but did not give up. Powerful but not powerful enough.